Do you know someone who has shown leadership in the preservation and protection of the environment or natural resources?              If so, consider nominating them for the Evergreen Award! We take nominations for individuals, groups, and businesses who have demonstrated grassroots environmental leadership in a variety of areas, including but not limited to:

Nominees can be nominated by an individual or groups can self-nominate. 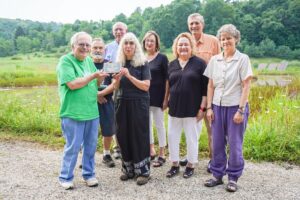 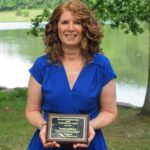 Tammie Robinson was presented the 2020 Evergreen Award on July 21 at Blue Spruce Park by Cindy Rogers and Bob Lankard. Normally the award is presented at Evergreen Conservancy’s annual meeting but it was cancelled this year Tammie was nominated by Douglas Beri – District Manager of the Indiana County Conservation District. Tammie has been the office administrator at the Conservation District for more than 35 years. It is Tammie’s involvement with the Indiana County Envirothon that made her award worthy. The Envirothon is designed to test high school students’ knowledge of Pennsylvania’s natural resources and environmental sciences. Tammie works with the Conservation District watershed specialist to coordinate volunteers, agency partners, day-off programing, and tests. Since the start of the Envirothon in 1987 Tammie has been the cornerstone in making it a yearly success. She was instrumental in starting a junior high Envirothon in 1999. She also helps raise money to support a scholarship fund for participants that has raised $36,000. Tammie was also a board member of Friends of the Parks for four years. In this extraordinary year because of the pandemic she organized a “virtual Envirothon”. This was the first online Envirothon held in Pennsylvania. Tammie reflected on the numbers of young people she has influenced as a result of the Envirothon since its inception 37 years ago. She is anticipating hosting Envirothon participants whose parents were involved in the first Envirothon. 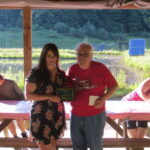 Anne Daymut Received the 2019 Evergreen Award Anne Daymut received Evergreen Conservancy’s annual Evergreen Award on Tuesday June 25th at Evergreen Conservancy’s annual membership meeting. Ms. Daymut was nominated for this award by Adam Cotchen of the Western Pennsylvania Conservancy office in Indiana. Anne is currently the Watershed Coordinator for the Western Pennsylvania Coalition for Abandoned Mine Reclamation. WPCAMR works with watershed volunteers, technical remediation experts, and government agencies to reclaim lands and streams polluted by historic coal mining in Western Pennsylvania. The organization was founded in1982. In this position Anne is well known by Indiana Conservation District employees, watershed groups, and conservation organizations. She is a resource for issues related to abandoned mine drainage. Anne was recognized for her help to watershed organizations and other environmental groups.

The Evergreen Conservancy Board has selected Dr. Katherine (Katie) Farnsworth to receive the 2018 Evergreen Award. Dr. Farnsworth was nominated for this award by Dr. Steven Hovan, chair of the Department of Geosciences at IUP. In nominating Katie Dr. Hovan cited her concern with local stream quality by installing monitoring systems, her involvement in storm water runoff prevention, and environmental education by going beyond her day job by being involved with high school teachers and students. Katie is a professor of geosciences at IUP. She received her bachelor’s degree in geography and computer sciences from DePaul University. She also received a masters and doctorate in marine geology from the Virginia Institute of Marine Science at The College of William and Mary.

Art Grguric of Saltsburg was presented the 2017 Evergreen Award. He attended with his wife, Donna. Art lives in Saltsburg with his wife of 47 years. They have four adult children: Mellissa, Art, Amy and Nicholas and 14 grandchildren. Art proudly claims he has gotten his whole family involved in his environmental projects. In 1984 Mr. Grguric and several fellow coal miners raised money to stock trout in Blackleggs Creek. This led to the establishment of the Blackleggs Creek Trout Cooperative and Nursery on Marshall Run. Under Grguric’s leadership the Blackleggs Creek Watershed Association was formed in 1986. Art helped secure $1.5 million funding for six abandoned mine treatment systems. He also established the Trout in the Classroom Program in the Saltsburg School district. In 2014, Art was selected as man of the year by Pennsylvania Outdoor News. He is best known for his Outdoor Wild Game Breakfast at Blackleggs Creek Memorial Park.

Evergreen Conservancy also recognized Indiana County Parks And Trails’s 50th Anniversary in 2017:
Indiana County Parks and Trails has existed as an organization for 50 years. Evergreen Conservancy and the parks organization
have enjoyed a close relationship ever since Evergreen was established. Ed Patterson, long-time director, was invited to the annual
meeting to receive recognition for the parks and trails contribution to Indiana County.
In 1983 Ed Patterson was hired as the third director. Indiana County Parks transformed into a facility more than just a place for Indiana residents to go for a family picnic:
• The Laurel Highlands Kennel Club shows brought recognition of Blue Spruce Park from outside the area.
• Blue Spruce Lodge and Lakeside Center made Blue Spruce a location for wedding receptions and other events.
• The Festival of Lights brought in 25,000 visitors by 2014.
• Friends of the Parks provided entertainment and education to those who may not otherwise go to a park.
• The Ghost Town and Hoodlebug Trails provided biking and hiking opportunities for residents.
• The park system expanded by adding covered bridges, the Waterworks Conservation Area, Old Smicksburg Park, Tunnelview
Historic site, Eliza Furnace, and Buttermilk Falls (made famous by Fred Rogers of Mr. Rogers’ Neighborhood), and the Blairsville
Riverfront Trail.
• Mr. Patterson enhanced the image of Indiana County Parks and Trails by writing and publishing guidebooks to the Ghost Town
and Hoodlebug Trails. He also published material about the little known creature – Wehrle’s Salamander. His most recent publication
was the 50 year history of Indiana County Parks and Trails. 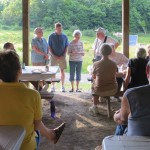 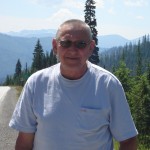 The 5th Annual Evergreen Award was presented to Alex Lezark. It was accepted by his wife, Nancy, his son, Patrick, and his sister-in-law, Delores. Alex was a member of PASEC/ EASI since 1998. He was a certified trainer in chemical analysis, how to use the colorimeter, and digital titrator testing, for AMD. He trained over 200 people, statewide, including students. He was featured in the EASI May 2002 Volunteer Stars Special Edition. He was active in the Blackleggs Watershed Association since 1998 and served on its Board of Directors for three years. AMD remediation projects have been designed and constructed using the data that he collected. In 1999, Alex began volunteering with the Kiski- Conemaugh Stream Team, testing water quality and collecting water samples. In 2003, he and his wife, Nancy, were Stream Team Volunteers of the Year. He also conducted seminars on AMD treatment systems  for Saltsburg High School. Since 1996, he was a member of the Ken Sink Chapter of Trout Unlimited, where he served as a board member for several years, and co-chaired the annual banquet for three years. In 2006, Alex and John Ferraro participated in Yellowstone Park Foundation’s Fly Fishing Program, where they assisted Bill Voigt (Volunteer Coordinator for the Fly-Fishing Volunteers Program) in gathering biological data from the Park’s fish populations. This data was used in critical research studies and restoration efforts.

The 4th Annual Evergreen Award was presented to John Somonick who was nominated by Indiana County PASEC. 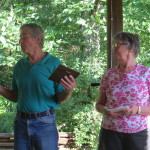 John was one of the founding members of EC back in 2004 and has consistently demonstrated his grassroots leadership in activities that have a positive effect on our environment. He has an impressive list of achievements including a life membership in all of the county watersheds, service on many county association boards throughout the years, talented map-making skills (his watershed maps of Indiana County will be incorporated into the county Comprehensive Plan and will also be used by IUP) and many other certifications, trainings and awards related to the environment.

The 3rd Annual Evergreen Award was presented to Karin Eller and Plant-It Earth. Karin and her business received an overwhelming three nominations and was chosen based on her amazing work with her business she co-founded, owns, and operates. 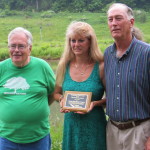 peppers in an area off the beaten path in southern Indiana County. She was persistent and committed to turn this idea into a vision for a business. She grows plants without herbicides, pesticides, or inorganic fertilizer, and all plants are organic. She maintains a beehive to help pollination and plants are watered by spring water only. Her business produces no garbage and Plant-It Earth is recognized as an Integrated Pest Management facility by PSU and as a National Federation Wildlife Habitat.

People will trek from Pittsburgh to make a special trip to visit Plant-it-Earth. Senator Don White said, “Karin and Plant-It Earth are operating in all ways possible to preserve the best that Indiana County nature has to offer.”

Her involvement goes beyond her responsible business practices. She is also active in the Blacklick Watershed-Laurel Run project, Four Footed Friends, Strongstown Historical Society Earth Day Projects. She has taught continuing education courses at IUP and created a living flag to honor veterans. 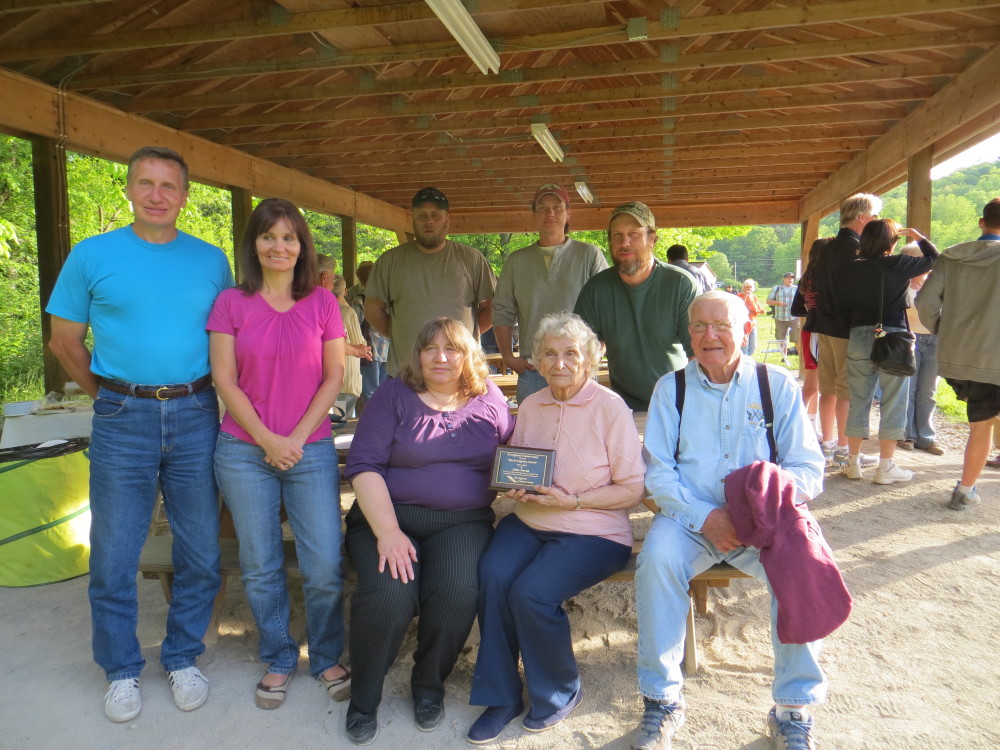 The second annual Evergreen Award went to the late John Novak. Mr. Novak was a lifetime advocate of the natural world. He was called “The Consummate Volunteer” because he was involved with so many different projects, was an outdoor educator, and was a member and officer of Crooked Creek Watershed. A number of family members were present at the annual membership meeting to accept the award. 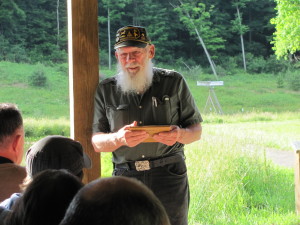 The first annual Evergreen Award was given to LeeRoy Vatter. LeeRoy has managed his 100 acre farm located along Crooked Creek since 1963. He has been active in many environmental focused groups over the years, including the Conservation District, the Governor’s Citizen Advisory Group, Youth Conservation Days with the Keystone Sportsmans’ Club. He has done hunter safety training as a member of PA Federation of Sportsmen, National Parks and Conservation Association Citizens against Water Loss Due to Mining, PA Forestry Association, Ken Sink Chapter of Trout Unlimited, Conservation and Environmental Resources Council for DCNR, Crooked Creek Watershed, Indiana County Pennsylvania Senior Environmental Corps, and Evergreen Conservancy. He has been a hunting a trapping instructor, rifle and pistol instructor, and a 4H instructor. He initiated Growing Greener projects such as the Keystone Wetland Assessment and Redesign Project, and Crooked Creek and Campbell Run Stream Bank Restoration Project at Falcon Park. He was involved in efforts to eliminate mining pollution near Ernest. Mine discharges and runoff from 300 acres of slag and waste coal has drained into McGee Run, a tributary of Crooked Creek, for decades.

LeeRoy has said, “Conservation of our natural resources is something that I’ve believed in for a long time.”