The sun, our solar systems own center star, is nearly 93 million miles away, but produces heat that we feel everyday. The earth completes one rotation around this star every 365 days / 12 months / or one calendar year. Between the rising and setting of the sun, we are constantly impacted by the rays from the sun. If one solar ray was clocked at going the speed of light (670 million miles/hour) it would arrive an estimated 8 minutes and 20 seconds later to Earth. The suns surface can get as hot as 10,000 OF, with a thick surface 200 miles deep called the photosphere. The energy of the sun is formed by the collision of hydrogen atoms to form helium atoms-or nuclear fusion.  With this kind of energy the sun can provide us with enough heat for several billion years.

Only a fraction of the energy is absorbed into the Earth’s surface, the rest bounces back into space or stays in the atmosphere. Over the years we have constructed a variety of contraptions to collected this energy, thus allowing us to gather solar power. So how do we capture the energy that does penetrate the atmosphere before it bounces back into space?

Solar panels are often called “photovoltaic” or “PV” panels because they use the “photovoltaic effect” to generate electricity.  Sunlight, which is a stream of photons, strikes specially treated, thin silicon sheets.  The photons knock electrons from the silicon atoms, and the electrons are collected in one part of the panel to create an electric current.  The electrical current is carried away from the cells through metal wires to the receiving end (most commonly batteries), which provide our daily activities with power. Look at the diagram below to see how a solar panel works: 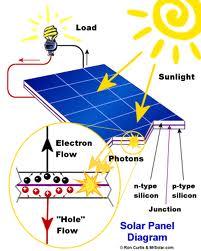 Just like wind turbines, solar farms exist too. Most people know that western United States contains some of the largest solar farms because of their readily available land and sunlight. But don’t forget, Pennsylvania has proposals for solar farms too. One of the largest solar farm proposals is for here in PA, learn about this new massive solar project at: http://greenenergyfinder.com/index.php?id=27&option=com_content&task=view.  PA has multiple small solar farms too. Private businesses offer residents solar installations on homes and for companies. Stay current about local solar farms and solar activities in PA and surrounding states at: http://www.dasolar.com/solar-blog/.

We are proud to announce that Tanoma has joined the crowd in this newest technology. At Tanoma, there are four 20 volt solar panels that produce 225 watts each at peak, for a total of 900 watts.  They are arranged in two pairs, each pair connected in series to produce at least a 40 volt current.  Then, each pair is connected in parallel to maintain the 40 volt current.  These solar panels are located along the wetlands collecting energy everyday, even through cloud cover.  The energy is stored in nearby batteries and used to provide electricity to the pavilion on site.   The batteries are special “deep cycle” batteries which can be discharged and recharged many times without damage.  The batteries are connected up in a 24 volt system.  “Charge controllers” take the current from the solar panels, and wind and hydro generators and allow it to flow into the batteries.  The charge controllers are sophisticated enough to take the 40 volt current from the solar panels and convert it to the 24 volt battery system; also, they prevent the batteries from being overcharged, which can destroy them.  The DC current from the batteries then goes into a 3500 watt “power inverter” that converts it to ordinary household current, 110 volt AC current.  Evergreen Conservancy is able to use this pavilion night or day, thanks to the sunlight collected from these solar panels.

We have provided two activities for kids to get interested in solar power by harnessing the power of the sun and creating their own masterpieces. Adult supervision and help may be needed for younger kids.  (resources:

2)      put piece of chocolate and mini marshmellows over gram crackers

Writing with the Sun

1)      Select your piece of wood with the shape and size you want. With adult supervision, use a saw to cut the wood to the right length.

2)      Sand the edges with sand paper so there are no splinters while handling.

3)      Use a pencil to write the lettering of your words onto the wood. Use block lettering to see best.

4)      After your sunglasses are on, use the magnifying glass to focus on the wood.

5)      Start at the beginning and slowly move the magnifying glass along the pencil markings when the wood begins to smoke and burn black lines into the wood.