Rainstorms, lakes, streams, oceans, and puddles all have something in common: they are made up of water. Water has provided us a source for recreation, agriculture, and hydration. Water has also been used for thousands of years as a power source of energy. You might have heard it called a watermill, water turbine, or water wheel. The basic concept is that a wheel placed in flowing water is connected to a network of gears to be used for a specific purpose. The gears turn creating mechanical energy from the kinetic power of the water passing by the water wheel. There are three types of designs for wheel placement in a flowing water body: Undershot- water flows under wheel (A), Overshot-water flows over top of wheel (B), Breastshot-water flows towards middle of wheel against bank (C).

These mills were used to manipulate raw materials into products like agriculture, textile, lumber, metal. A famous example is a flour mill. Grains like oak, wheat, rye, and barley were collected by farmers and brought to the mill. At this mill, the grain was ground on stone that rotated from the circular motion of the water wheel and gears.

Now imagine taking this productive concept and apply it to a generator that can hold that energy provided by the water wheel. This method of harnessing energy is called hydro electricity. Dams are the most commonly known hydro facilities used. Dams create a reservoir (man made lake)that can control the outflow of water through a water turbine generating electricity. Pennsylvania has several power plant dams that create hydro electricity. These include:

This is one example of a water turbine. Now it might not be as massive as these dams, but it can still produce hydro electricity. These pumps will supply oxygen to the ponds allowing more dissolved oxygen to flow through the system. 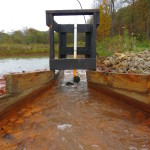 This is the new water turbine installed in Fall 2013. We’ve installed a new hydroturbine at Tanoma. It’s an Ampair UW 100 model of turbine and is ideally suited for good, fast flow in a shallow stream with no “head”– that is, water flowing with no significant drop in elevation.

We have provided an activity for kids to get interested in hydro power by creating their own turbine. Adult supervision and help may be needed for younger kids.