On route  286 coming from Indiana, turn left onto Tanoma Road (by the church with the gold dome). Stay on Tanoma Road for about 2 and 1/2 miles (you will go over 2 small one lane bridges, stay left on Tanoma Road at a Y in the road). Turn left on Rayne Church Road. The Tanoma AMD Wetlands Educational Site is immediately to your right.

On route 119 coming from Indiana, turn right onto Tanoma Road at the Dollar Store. Travel on Tanoma Road until you get to the little town of Tanoma and bear right to continue on Tanoma Road. Turn right at the first road on your right – Rayne Church Road.

You can put the following address into your GPS: 3900 Rayne Church Road, Tanoma, PA 15701′ Park in the parking lot.

Begin your tour at the parking lot. Pick up a brochure at the pavilion to help you identify plants and trees at the site. Enjoy your walk! 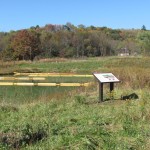 The Tanoma Passive Mine Drainage Treatment Project was initiated in 1995 by the Crooked Creek Watershed Association. Developed by the PA DEP, the site uses a series of ponds/wetlands designed to filter water, removing heavy metals and pollutants. The Evergreen Conservancy acquired the site in 2006, taking over maintenance of the site from the Southern Allegheny Conservancy.

The discharge originates from a mine pool estimated to be in excess of two billion gallons, fed by three connected mines which partially flooded with water when they were closed in the 1950s and 1960s.

The natural limestone present in the mine pool acts to neutralize the acidity in the water, however, the water still contains a high concentration of iron. Untreated, this discharge dumped 126 pounds of iron per day into Crooked Creek.

Our Tanoma AMD Wetlands site is open to the public and includes a self-guided trail and pavilion with picnic tables. Signage along the trail provides information regarding our AMD treatment system, renewable energy, and native plants and trees seen at the site. We also offer a wide variety of guided activities and educational programs appropriate for students ranging from elementary to the college level. Visit our Environmental Education page for more information.

A new Trompe system was installed late in 2015. A trompe, originally developed in Italy in the 17th century, is a passive hydraulic air compressor. The system has no moving parts and does not require any energy to operate. Abandoned mine water flowing out of the Tanoma treatment system powers the trompe which generates compressed air that is piped into the first settling pond. The added oxygen increases the efficiency of iron precipitation/capture at the beginning of the treatment system. 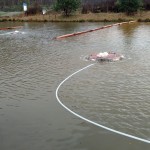 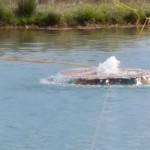 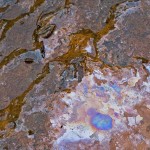 Occasionally you will see an orange pudding-like substance near the Leptothrix discophora film. The pudding-like reddish material is probably the product of the iron-oxidizing bacterium Leptothrix ochracea.

Several conditions favor the growth of iron bacteria. The situation in Tanoma is slowly moving water, and water that contains little dissolved oxygen. Unfortunately the appearance of these bacteria may indicate that our system is not functioning as efficiently as it should. The trompe system installed in 2015 will increase the level of dissolved oxygen in the water, increasing the efficiency of the system. This should in turn reduce the presence of these bacteria.

If you are interested in Leptothrix discophora you can visit the following web site for more information. Linda Grashoff http://www.lindagrashoff.com/Text_Pages/Frequently_Asked_Questions.html

• We had a new storybook walk supplied from the library again this year called In the Small, Small Pond by Denise Fleming.
• With the hard rains and bad weather patterns we still have had some flooding issues every time it rains hard where Crooked Creek comes over its banks but since we got the pavilion base done with poured cement it has not washed out. We have had to rake the sides and the path.
• We continued to do bi-weekly water testing at Tanoma to check the system.
• We did some tree maintenance to clear some brush this fall plus other general maintenance to clear weeds and keep the path clear.
• IUP ‘Into the Streets’ students helped out on October 20th to clean up for the winter and take down the storybook trail.
• On October 20th we did a tree planting along Crooked Creek to fill in thin and open spaces.