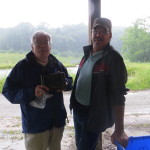 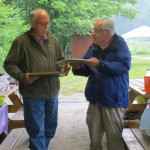 Our annual picnic broke the record for amount of rain during the event. About 6 board members showed up to get set up about an hour before the scheduled picnic. As it began to rain harder and harder we realized there was a good chance no one would show up and there was no real good way to cancel at that point. So we were hungry and decided to go ahead and start the grill! As we were cooking people actually began walking in the rain to the pavilion. All told about 16 hardy souls showed up and we had a grand time having a picnic under the pavilion as we watched Crooked Creek strain its banks. We had a brief business meeting and Cindy recounted our accomplishments of the past year. We voted to retain the current  board members and welcomed Nicole Kelly as a new board member. Before people got called away to pump basements we gave the Evergreen Award to Art Grguric of Blackleggs Creek Watershed Association and Trout Nursery, a long time steward of the water and land. Later we gave a certificate of appreciation to Ed Patterson in honor of the 50 year celebration of Parks and Recreation in Indiana County, a very well deserved honor.  We called it a night and headed home. Thanks to all the folks who braved the weather to turn out… We will try and reserve a better weather day for next year!